Situation: The National Immunisation Coverage Survey (NICS) conducted between 2016/2017 placed Sokoto at the tail end of the ranking in terms of Coverage of 3rd Dose of Pentavalent; the coverage was 3.7 per cent. An In-depth RI program Review on status of RI in Sokoto state conducted by WHO discovered Vaccines being sold in open market for unintended use. The reviewers and researchers that conducted the sweep activities recommended, among others, Cold Chain Officers (CCOs), Local Immunisation Officers (LIOs) and Managers should be given refresher training on vaccine accountability especially from a faith based perspective and dangers involved in selling of vaccines to non-health workers. The Sokoto State PHCDA approach the dRPC, given its work in Katsina state, for support to tackle this problem in Sokoto.
Response: Upon receiving the request by the Sokoto state Primary Health Development Agency (SSPHCDA), the dRPC in its collaboration with the Kano Emirate Council Committee on Health – KECCoH (supported by the Bill and Melinda Foundation)  and Muslim Scholars that the dRPC trained under its Saving Lives at Birth (SLaB) Project, put together a team of experts to conduct outreach and sensitization workshop on vaccine accountability for the Routine Immunisation stakeholders in Sokoto state. They consisted of the State team, Cold Chain Officers, Local Government RI Liaison Officers & Zonal Coordinators. The workshop had in attendance the representatives of the Sultanate Committee on Health.
After presentation on the general health indicators as it relates to RI coverage in Sokoto and Northern Nigeria in general, the process facilitator led the participants to identify the barriers to the implementation of RI services as it relates to programme operators in the state. Few among the barriers identified include; Shortage of functional solar refrigerators, Shortage of cards and KPI tools and lack of transport to move round for inspection and supervision. The state team, CCOs, RI focal persons with support of the team of facilitators developed an action plan to address the barriers so identified. The SPHCDA Executive Secretary, who was part of the action plan development, assured the participants that the agency will address all the issues identified by the RI stakeholders.
The Muslim Scholars sensitized the RI stakeholders on Vaccine Accountability from Islamic perspective. They also urged them to be just & god-fearing in doing their work as they will have to account for their deeds in the day of judgement. 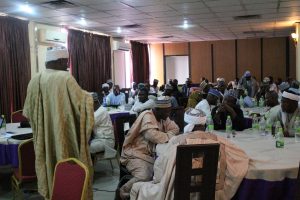 The participants confirmed that they benefited from the workshop sessions and expressed their determination to work towards placing Sokoto state at the top of the ranking next year!